A Year in Review with ARoFIIN

A YEAR IN REVIEW WITH AROFIIN

The Asia Roundtable on Food Innovation for Improved Nutrition was set up in 2015 by the Health Promotion Board (HPB), an agency of the Ministry of Health, Singapore, Agency of Science Technology and Research (A*STAR), Singapore Institute for Clinical Sciences (SICS) and Food Industry Asia (FIA), to leverage public-private partnerships by gathering experts from across government, academia, industry and civil societies to initiate and sustain a regional, multi-stakeholder dialogue to tackle malnutrition, obesity and chronic diseases.

Acting as a catalyst for multi-stakeholder action, ARoFIIN also works with stakeholders to stimulate scalable, cost-effective multi-stakeholder strategies for a healthy and prosperous Asia by driving a positive change in consumer behaviour and innovation.

We speak to the ARoFIIN team to understand some of the key achievements of 2018 and what the plans for the roundtable are in the upcoming year.

ARoFIIN has grown significantly since its inception in 2015. Fuelled by last year’s accomplishments with the launch of the Economist Intelligence Unit Report on “Tackling Obesity in ASEAN,” and a series of workshops that followed to address the magnitude of problem and to discuss collective actions, particularly linked to strengthening nutrition education to children helped shape the agenda for 2018.

This year, ARoFIIN has extended its partnership network by welcoming regional nutrition associations, the Indonesian Ministry of Health, IGOs and NGOs including the World Health Organisation Country Office (Indonesia), Thailand Food and Drug Administration among others in an effort to accelerate country-level initiatives to combat the growing health challenges. Through the course of 2018, ARoFIIN has showcased that multi-stakeholder dialogues can be translated to localised action when various sectors see a common vision in improving nutrition. 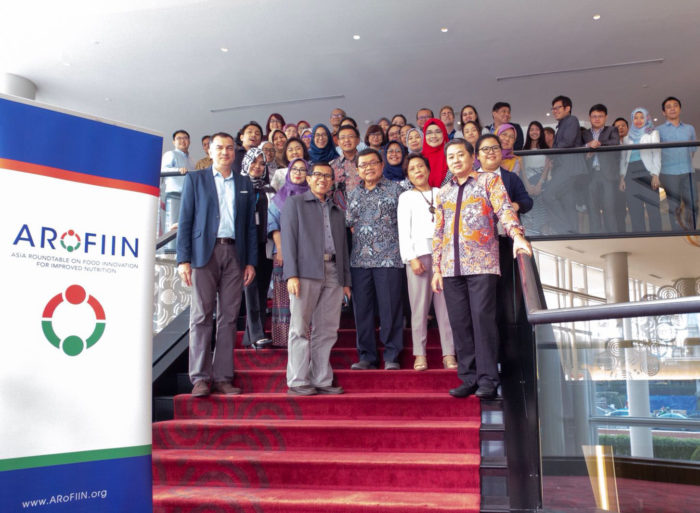 As such, two country-level initiatives will be piloted in Indonesia and Thailand to raise nutrition awareness in children to equip them with the knowledge and skills to lead healthy lifestyles, by creating an environment where healthy choices are the easy choices. ARoFIIN will be working with the Indonesian Government and the United Nations World Food Programme by leveraging on the existing initiative to increase the consumption of fruits and vegetables in school children as part of a larger holistic framework to gain access to nutritious foods and education. Likewise in Thailand, the partnership with Mahidol University will support the improvement of nutrition communications in schools by educating and enabling students as the “agents of change” to promote healthy eating and lifestyle behaviours to theirs peers and families, enabling a healthy community.

2. What are the plans for the Roundtable in 2019 and how will ARoFIIN continue to tackle the dual burden of malnutrition?

2019 is definitely an exciting year for ARoFIIN as it kicks off the pilot programmes in Indonesia and Thailand. While scaling up programmes in these two countries is one of the elements to look out for, ARoFIIN will continue to drive a collective and honest dialogue in the region, acting as a catalyst to foster mutual trust and understanding with stakeholders across sectors to address malnutrition which ultimately will drive transformational changes in Asia. The roundtable will enable such country-specific discussions on food innovation, nutrition and health promotion by gathering stakeholders from the governments, academia, industry and civil societies through the development of resources to bridge knowledge gaps to better understand the Asian diets and consumers, maximising the impact of future interventions to promote a healthy community.

3. What other pressing public health problems will be a key focus for ARoFIIN in 2019?

According to the Global Nutrition Report 2018 that was launched in November, undernutrition explains around 45% of deaths among children under five, were mainly in low and middle-income countries and the health consequences of overweight and obesity contribute to an estimated 4 million deaths (7.1% of all deaths). These alarming statistics from the report indicate that the burden of malnutrition is unacceptably high with an extremely slow progress in tackling it.

While it has been well established for many years that undernutrition coexists with overweight and obesity at a country level, ARoFIIN has focused on responding to the steep increase in prevalence of obesity in the region since it was first convened.

In 2019, ARoFIIN will continue to work with its local partners to curb the rising obesity rates in the region through the scale-up of interventions targeted to raise nutrition knowledge and awareness among children; while also exploring mechanisms to curb the growing rates of stunting, wasting and micronutrient deficiencies, particularly in women and children that are deficient in iron as these coexisting burdens affect millions of children, which in turn can influence ill health in adulthood.